Aspire has always been an innovator in sub-ohm vaping, and it has produced many game-changing tanks and mods, including the Atlantis, Pegasus, and Triton 1 and 2. The Aspire Cleito series features some of the vaping world’s favourite sub-ohm tanks today.

While the original Aspire Cleito was carefully engineered for fantastic vapour production and flavour, the Aspire Cleito EXO enhances this further with a unique airflow system, stainless steel case, and adjustable capacity.

At an affordable price of £24.99, this tank deserves consideration for every sub-ohm vaper’s collection. 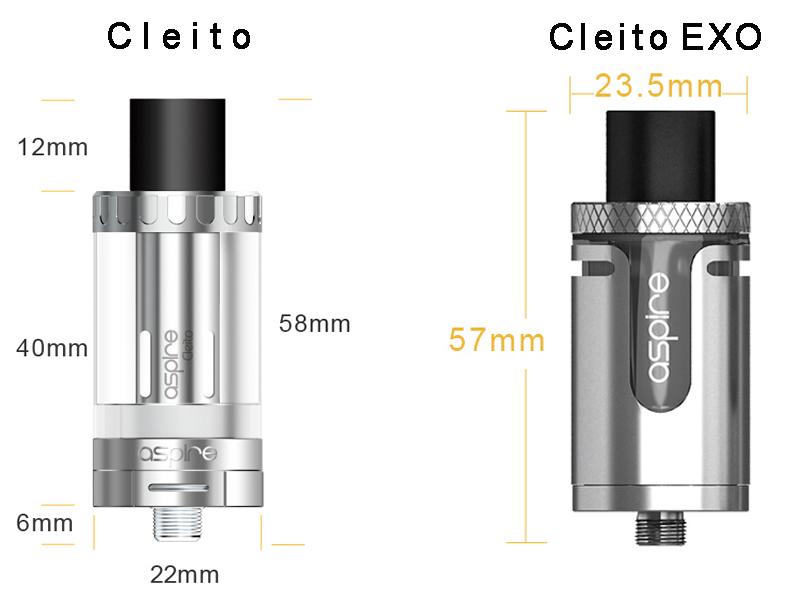 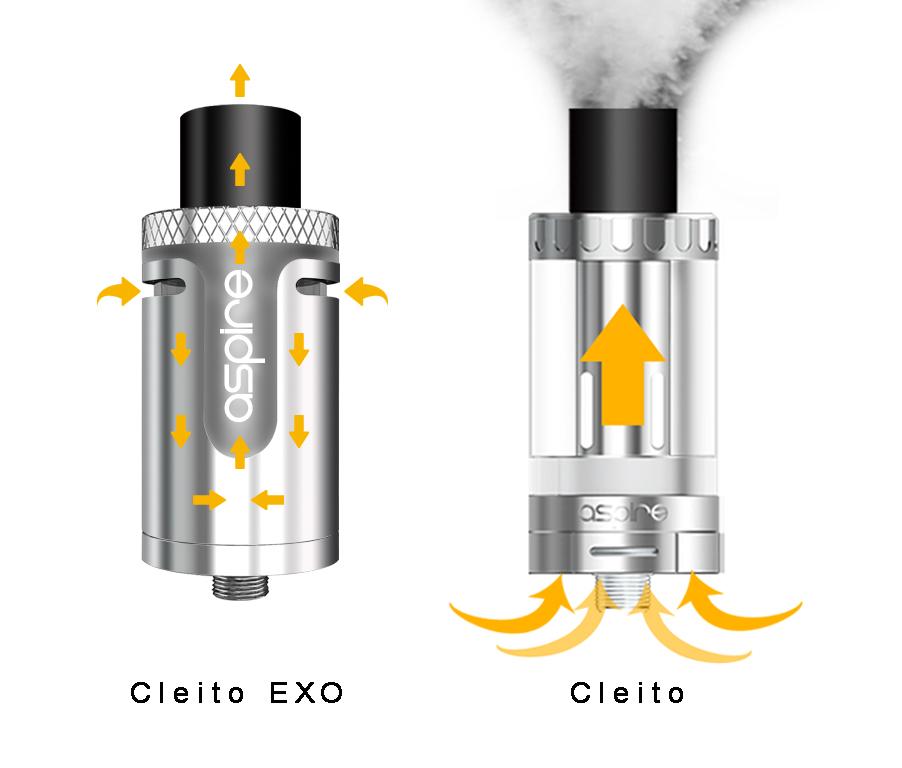 What are the Key Benefits of the Aspire Cleito EXO? 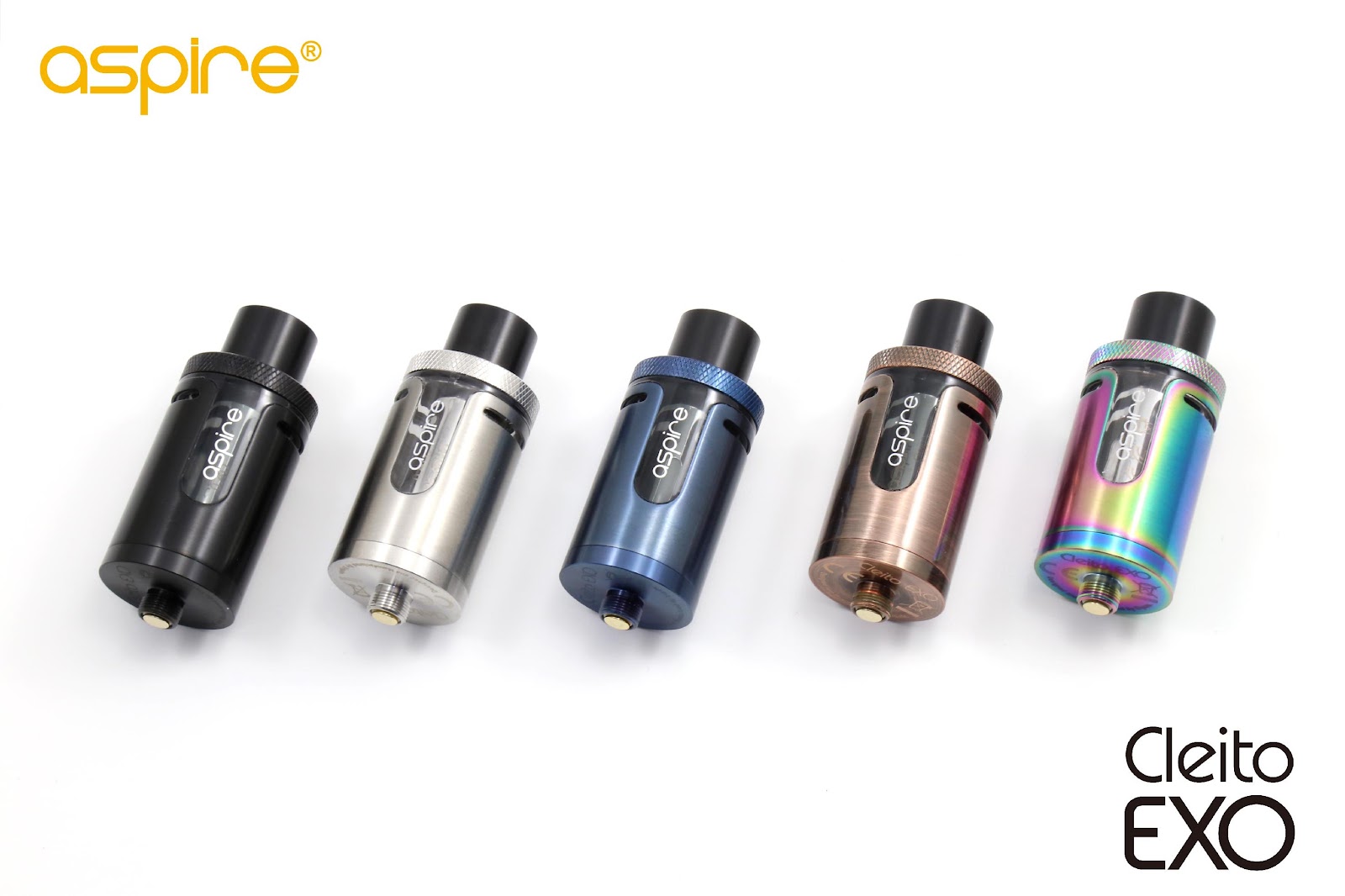 What are the Standout Features of the Aspire Cleito EXO?

A Detailed Look at the Aspire Cleito EXO

The Cleito EXO is lightweight and portable. At 23.5 mm wide, it’s a good fit for most standard mods.

Refilling with e-liquid or disassembling can be done quickly because of its top fill structure. You only have to unscrew the top cap to access the atomiser. Although the tank is mostly covered in stainless steel, you can spot the e-liquid level through two small openings.

Its atomiser runs from the bottom section of the tank up to its top cap. The tank also has a wide-bore delrin drip tip.

Many vapers have confessed to buying the Cleito EXO because of its design. If you’re wondering where the EXO in its name comes from, it probably inspired by “exoskeleton,” since the tank is covered in a stainless steel case. Unlike tanks made of glass, the Cleito EXO is tough and durable, and it’s unlikely to ever break or crack from vaping.

The price may be on the more affordable end, but its build remains high-quality. Striking an impressive profile in five eye-catching colors, the Cleito EXO is versatile enough to look stylish with just about any device. You can choose from Stainless Steel, Black, Blue, Anodised Rainbow, and Bronze designs.

Overall, the look is sleek, well put together, and stylish. The Cleito EXO has somehow managed to excel at both visuals and performance—a double kill from the Aspire engineers.

One of the most exceptional features of the Cleito EXO Tank is its unique airflow system.

Most sub-ohm tanks have their airflow holes at the bottom, but the downside of this is that it’s prone to leaking. With the Cleito EXO, you don’t have to worry anymore about e-liquid spilling messily all over your hands or inside your pocket. Leaking is prevented through vastly improved airflow and top-air technology. The Cleito EXO’s air holes are at the upper part of the tank, right at the side, so the air is sucked in from the top. It then reaches the bottom of the tank before climbing up through the center.

Because of this airflow system, the Cleito EXO is completely leak-proof. Although this is an often advertised feature, it’s rare for tanks to actually pull it off, but the Cleito EXO doesn’t leak even in plane rides! It’s also designed to boost stock coil performance by mechanically choking airflow to minimise air flutter and spitting. Ultimately, the result is superb flavour and vapour production, with a smooth, clean hit that makes vaping nearly effortless.

Notably, the Cleito EXO doesn’t have airflow control, and its default airflow is like the original Cleito’s when half-closed. This works well for most vapers, who don’t aim for extremely high wattages.

There are two package versions, based on location:

Why is There a TPD Version?

The TPD version is for EU countries, including the UK that are bound by the Tobacco Product Directive. According to the TPD, the maximum e-liquid capacity of any vaping tank should be 2 mL. The Cleito EXO Tank is 3.5 mL by default, so to avoid making another version altogether, Aspire came up with an ingenious solution.

There’s a reason why the 0.16-ohm coil is already installed inside the Cleito EXO. The 0.16-ohm coil is significantly bulkier compared to other coils that go with the tank, so when it’s inside the Cleito EXO, the tank’s capacity is reduced to 2 mL. However, use a smaller 0.2 or 0.4 ohm replacement coil instead, and the tank can hold 3.5 mL of e-liquid. Two capacity options in one tank, with no extra parts required besides a quick change of coil unit. Perfect.

Which Coils Fit Inside the Cleito EXO Tank?

The Cleito EXO and Original Cleito have the same lower coil threading, so you can use the pre-installed 0.16 ohm high-capacity coil, or the original Cleito 0.2 ohm or 0.4 ohm coil unit. All of the coils are innovative Clapton coils made of kanthal.

Out of these three, the 0.16 ohm coil is preferred by flavour-chasers since it’s the best at bringing out the flavour of the e-liquid. You’ll struggle to understand how a replaceable coil can taste so rich! Its recommended wattage is 60-100 W. On the other hand, the 0.4 ohm coil works best from 40 to 60 W, while the 0.2 ohm coil is better suited for 55-70 W.

The Cleito EXO is a top-fill tank, so refilling with e-liquid is straightforward. Simply remove the top cap and refill directly with e-liquid.

To replace the coil:

Is there a way to blow bigger clouds?

For even greater cloud-blowing performance, you can also deploy the Cleito RTA system with Cleito EXO. Imagine running Aspire sub-ohm Clapton coils for huge cloud production, whilst also benefitting from a quick-fill leak-free design! This will be the ultimate tank set-up.

The Cleito EXO represents the most aggressive design evolution that Aspire has presented to-date. It’s sturdy and well-designed with innovative airflow, leak-free top-fill technology, and a refined look. As part of the Aspire Cleito series, it even tops the performance of the original Cleito tank, thanks to additional features.

Sub-ohm vapers who would rather keep airflow control simple will find their ideal tank in the Cleito EXO. Although there’s a tendency for sub-ohm tanks to compromise on flavour, the Cleito EXO manages to balance its generous vapour production with dense flavour, partly because of its special coils. Flavour-chasers also swear by this tank, especially with the 0.16-ohm coil.

For a top-of-the-line sub-ohm tank, the Cleito EXO is accessible at just around half the price of many sub-ohm tanks out there. Aspire did a great job with this tank, and it’s a future-proof model that’s likely to remain a classic among the vaping community for a long time. Even when the world changes around you, the Cleito EXO will still remain a beloved part of vapers’ lives. Harness true future-proof vaping technology, vape with the Cleito EXO now.